Originally from Montréal and working in the Maritimes since 1980, Michel Cardin has gained international recognition as a teacher, performer, musicologist and producer. He is currently full professor of guitar and lute at the Department of Music of the University of Moncton (Canada), with a PhD equivalence status, and has made 12 compact discs of solo Baroque lute music. This series of recordings, consisting for the most part of world premieres, is dedicated to The London Manuscript by Silvius Leopold Weiss (1686-1750), the undisputed master of the instrument.

The enormous enthusiasm for these recordings, shared by critics and the general public alike provides unambiguous justification for the re-discovery of such a great composer. Michel Cardin has given concerts in Europe, Canada, USA, Japan and Africa. At one of his European tour, a German critic wrote:

“The well attended concert in Heidelberg presented us with a superb demonstration of a refined instrument by a master with charismatic sonority. Indeed, Cardin proved to be the ideal aesthetic representative for Weiss’s complex works (…) of which we could discover all the subtleties thanks to Cardin’s fascinating, full, delicious playing, with its intelligent and gracious phrasing, a full and appropriate ornamentation, and most of all, a convincing contemplative stage presence. Wouldn’t it be logical to mark this great national composer’s 250th anniversary, along with J.S. Bach?”

He obtained in 1977 a ‘First prize’ diploma from the Montreal Conservatory in guitar performance, solfege, harmony and counterpoint. His list of teachers is impressive, with Stephen Fentok, Alexandre Lagoya, Alirio Diaz, Alberto Ponce, John Mills, Oscar Ghiglia for guitar and Toyohiko Satoh, Patrick O’Brien, Nigel North, Robert Barto, Jakob Lindberg, William Christie (at the Paris Conservatory) for instruction in lute and continuo on theorbo. As a theorist he performed under William Christie, Andrew Parrott and Christian Mendoze, in addition to the Musica Divina and Les Idées Heureuses ensembles. He also founded the Ensemble Baroque Montéclair in 1990.

Along with radio and television performances (“Les beaux Dimanches”, etc.) he has at the same time taken part in important shows in Atlantic Canada, such as the concerts for the Bicentennial of New-Brunswick, the Acadian World Congress and the International Francophony Summit, as well as appearances at the Éloizes and East Coast Music Awards shows. Michel Cardin has received fifteen nominations and six awards at events of this kind, including the ADISQ, and have been among the Discs of the Week and the Best buys of the Year on CBC-FM. Rick Phillips’s Sound Advice program gave them a ‘5 stars out of 5’, and Vol. 1 took second position in the international “Top Ten” classical albums of the year (orchestras & soloists) in Voirmagazine, 1994. The London Manuscript-Vol.5 won Quebec’s Music Council’s OPUS award 1998 for classical album of the year. M. Cardin was awarded the Geocities Vienna 2000 Award for outstanding artistic merit for the new millennium, the Éloize 2001 Award for best international exposure outside Atlantic Canada, two Étoiles Awards (classical artist and album of the year), and has received the prestigious Excellence in Music Award from the Government of New-Brunswick. His CDs got high praise in respected international magazines as Fanfare Magazine, Diapason and Le Monde de la Musique, and are regularly played by the Canadian FM stations. At her September 2000’s program, Carole Trahan said:

“Michel Cardin is not only an exceptional musician, he is also a man of great challenges.”

He finds time for contemporary music in his busy schedule, having premiered new pieces dedicated to him, for the lute and for the guitar, one of which was on the 1986 recording of the Atlantic Canadian Composers’ Association. In 1991 he played the guitar part in Le Marteau sans maître under the direction of Pierre Boulez at the Scotia Festival. As a composer he has written various works for films, radio, etc. Michel Cardin has recently acquired experience as a recording producer and has published regular musicological articles in European, American and Asian periodicals. In addition he realized a computer-assisted transcription into modern notation of one of the Christmas Oratorios by Marc-Antoine Charpentier. A Silver Medalist of the Royal Society of the Arts, he was a jury member for the Canada and the New-Brunswick Councils. 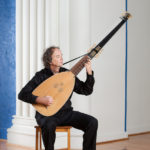 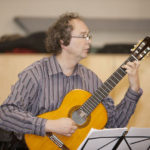